Helen Howell graciously agreed to do an interview for my blog, for which I am most grateful. Helen is an inspiration to women everywhere, who have always wanted to write, but have not had time because of family obligations, and think they are now too old. Helen is a shining example that we are never too old, and in fact, many of us get better and more creative as we age, Helen most certainly has! Enjoy the interview!

Where did you grow up, and how did this influence your
writing? 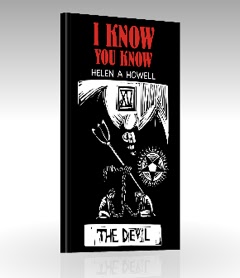 I Know You Know – Published by Crooked Cat February 2013

The darkest cards in the tarot deck
reveal the darkest side of the man sitting opposite Janice—Mr. Edgar Kipp.
She feigns an inability to read for
him, but will he believe her?  His parting words indicate that he knows
she knows he’s a serial killer. And he plans to return.
The voice of her dead grandmother
urges her to be careful, warning Janice she might be seeing her own future in
those foreboding cards.
But Janice doesn’t want to listen.
Gran’s dead.
How can she possibly help her?
Available from Amazon US & UK
–  http://www.amazon.com/I-Know-You-ebook/dp/B00BH59NAU/ref=sr_1_1?s=digital-text&ie=UTF8&qid=1361166885&sr=1-1&keywords=I+know+You+Know+Helen+A.+Howell

Jumping At Shadows: Self Published
2012
Blurb
When Belle discovers the secret of a
family heirloom, she and her friend Rosy are propelled into a world of the
shadows—the same shadows that have been haunting Belle all her life. Soon Belle
realises that the future rests in her hands, and only she can keep the magic of
her ancestors from falling into the clutches of a dangerous mad man.
Link: http://www.smashwords.com/books/view/204743
Posted in:
Tags: australia, author, interview, writer
/ 5 Comments